William Shakespeare’s MacbethThe tragedy “Macbeth”, like many of Shakespeare’s dramatic works, was created on the basis of the legend of the tyrant king, whose image the author so skillfully embodied. However, researchers of Shakespeare’s work and historians have come to the conclusion that the pathos and plot of the work contradict historical facts. During the reign of the Scottish King Macbeth, poet-bards belonging to opposition circles created a story about a murderous ruler, which served as the source for writing the play.

The work was created in the classical staged genre, which is achieved by a heap of scenes, an expanded system of images and a dynamic development of the plot. This was the reason for the high popularity of the work. From the time of Shakespeare to the present day, the tragedy “Macbeth” has been included in the repertoires of theaters around the world, and there are also numerous film adaptations of the work.

“Macbeth”: a summary of Shakespeare’s play

The play opens with a conversation between three witches. They set up the next meeting when one of the commanders defeats the other. In the wasteland where the gathering of witches will take place, according to them, Macbeth will certainly come.

A sergeant arrives from the battlefield, who informs the Scottish king Duncan of the news of the glorious victory of his relative and one of the best generals, Macbeth, over the Irish. The Scottish army is attacked by Norwegian troops, united with Duncan’s former ally, the Thane of Cawdor. And again, a brilliant military leader defeated the enemy. The king orders the execution of the defector, and the title of Cawdor tan is deservedly bestowed on the winner.

Summary of Shakespeare’s play Three witches meet again in a stormy wasteland. They are noticed by the generals Macbeth and Banquo moving towards Duncan’s residence. The witches hail Macbeth is Thane of Gdamis, his rightful title, Thane of Cawdor and future king of Scotland. Flattered, Macbeth asks them to tell him about Banquo’s future. They see him not as a king, but as an ancestor of future monarchs.

The subjects of the king congratulate the generals on the victory, and Macbeth also on the new title. It seems to him that the prophecies of the witches have begun to come true. In his dreams, Tan already sees himself on the throne, but, respecting the king, he will not be able to decide on a vile act.

The king praises the winners and distributes honors. To show his respects to Macbeth, the monarch promises to stay at his castle. And he declares his son Malcolm his heir. Macbeth is enraged by this fact. Seeing his rival in the prince, he is already ready for anything, just to get the throne.

Lady Macbeth receives a message from her husband, from which she learns about predictions. She believes that there is no better candidate for the throne, but her husband lacks determination. She decides to take matters into her own hands. As soon as Macbeth arrived, the wife firmly stated that the king should be destroyed on that one night that he would spend here. Macbeth is afraid of committing a crime and being punished for it. The wife, accusing him of cowardice, stubbornly prepares a plan: to drug the royal retinue with a potion and kill the sleeping king with their daggers, thereby averting suspicion from herself.

Duncan arrives at Macbeth’s castle and presents everyone with gifts. After dinner, he goes to the bedroom, where Macbeth enters and kills his royal relative. Tan is overcome with excitement, he can come to his senses because of what happened, so his wife has to cover up the traces of the crime.

Suddenly there is a knock on the door. One of the most influential people in Scotland, Macduff and Lenox, came to the king. In nightly attire, under the guise of a hospitable host, Macbeth escorts the guests to Duncan, where the picture of the murder is on the face. In a fit of imaginary outburst of anger, Macbeth kills servants stained with blood, after which no one doubts their guilt, except for the sons of the king. They decide to flee: Malcolm to England, and Donalbain to Ireland, which makes Macduff think they are guilty of killing their father for the sake of the throne.

As the witches prophesied, Macbeth becomes the new king. The childless new monarch remembers the words of the witches and about Banquo, who has a son. He decides to confront fate by destroying both. The royal couple give a feast, before which Banquo must leave on business, promising to return to the celebration. He is accompanied on the trip by his son. Upon learning of this, Macbeth sends two assassins after them. They attacked Banquo, and the son escapes to avenge his father’s death. At the feast, Macbeth sees the bloodied ghost of Banquo sitting in his place. The king is beside himself, and Lady Macbeth explains this with illness.

Macduff did not appear at the feast, whom Macbeth considers a traitor based on the denunciations of his spies. Scottish nobles gather in the palace and, discussing the escape of Macduff to England, consider the power of the king as tyranny.

Macbeth goes to the witches again. They summoned the spirits, who said to beware of Macduff. They assured him that no one born of a woman would kill him. And they added that the king is invincible until Birnam Forest moves on his castle. The pleased king asked if Banquo would rule, after which images of future monarchs came out to the music, behind which walked the ghost of Banquo, proud of his great-grandchildren.

Macbeth, having learned about the flight of Macduff, sends mercenaries to destroy his family. Lady Macbeth goes mad with remorse and dies. Meanwhile, in England, Macduff persuades Malcolm to return and overthrow Macbeth, the military leader Sivart, the uncle of the prince, comes to their aid. The rebellious Scottish people join their army. Upon learning of the murder of his wife and son, Macduff wants personal revenge. Before the assault, while in Birnam Forest, Malcolm tells the soldiers to pull out a branch and carry it in front of them to hide the size of the army.

Believing in the prophecies, Macbeth does not even worry. But he finds out: in infancy, Macduff was taken out of his mother’s womb, that is, he was not born a woman, and the messenger said that Birnam Forest was moving towards the castle. The prophecies came true: the enemies fought to the death, and Macduff brought the tyrant’s head. Malcolm’s army won, and the rightful heir invited everyone to the coronation ceremony.

The creation of the character system, like the history of writing, has a biographical basis. In fact, King Macbeth was not a tyrant and a murderer. He defeated Duncan in a fair duel and ruled safely for many years, surrounded by the respect of his people. According to researchers, Shakespeare created his tragedy in order to please a distant relative of the same Banquo – King James, who especially reveres the theater and is fond of writing treatises on witches and witchcraft. That is why in the work the image of Macbeth takes on an emphatically negative connotation, and Banquo is shown as a true knight.

Symbolism in the play

A special role in the development of the plot and the ideological content of the work is played by the synthetic inclusion in the composition of the play of scenes with the participation of witches, in which the procession of future monarchs from the Banquo family is shown with special pathos.

The skill of the author in creating the characters of the tragedy lies in the development of images during the course of the play. A brave commander and loyal subject, Macbeth becomes a murderer and tyrant under the influence of poisonous thoughts about fame and the persuasion of his wife. After the first kill, he is confused, but later getting blood on his hands is no longer so scary for him. The image of Malcolm is also changeable. After the murder of his father, he runs away to save his life, but in the end he is not afraid to die for the well-being of his native country.

The tragedy of William Shakespeare’s “Othello” is replete with intrigues, conspiracies, examples of human folly and the unconditional victory of feelings over reason.

In the work “Macbeth” in the image of a ruthless tyrant, Shakespeare shows the weak nature of a man who was broken by the lust for power. At the end of the work, all that remains of the once great and honest commander is the former valor, which turned into the blind despair of a man who lost everything. The play “Macbeth” is an image of the tragedy of a power in times of internecine wars through the fall of a person who put his honor, friends, even life on the line, playing with death for power and position in society.

5 / 5 ( 1 vote )
Author: Katya
Like this post? Share:
Also may be interesting for you!
William Shakespeare
Shakespeare’s Midsummer Night’s Dream, a comedy in five acts, was written in the mid-1590s.
John Green
The Fault in Our Stars by John GreenThe Fault in Our Stars is the
Life
The definition of role model In these challenging times, we have right now with 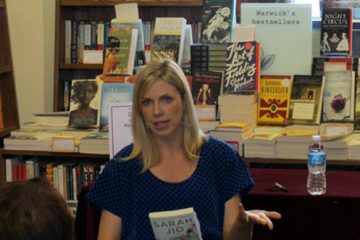 Sara Gio
Brief summary of Blackberry Winter “Blackberry Winter” was once called the cold snap (up
book reading
Books after which you want to live book, like a word, can heal or
Poetry
Article menu: Text of the poem History of creation The theme of the work
Subscribe
Login
1 Комментарий
Oldest
Newest Most Voted
Inline Feedbacks
View all comments

A very cool and original work that marks an entire era, the era of the great Shakespeare. Almost everyone, when asked about the work of Shakespeare, will say with 100% probability about Hamlet or Macbeth, great leaders who, however, due to their human traits, fail in government. The great tragedy shows us the rise and fall of one of the greatest kings of the ancient kingdom of Alba. I love history and retellings of ancient legends, epics, and dramas, in which Shakespeare was a genius, and in his time and ours, this epic does not get old!